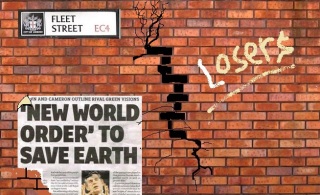 Like dementia victims on mobility scooters, the newspapers of Britain go
trundling down the exit ramp of history. Time is up for the Presstitutes, and they know it.
UK newspapers were never that great, to be honest, but I grew up reading and – occasionally at least – buying them. Saying this tells you I am old – old as a Time Lord. So let me confess that in ancient times (the twentieth century) we all read newspapers and knew what to expect from them.

The Times (a generous 3 foot x 18 inches) was for posh, private-school types, and delivered pompous editorials which politely invited readers to step deep into the loving embrace of the Establishment. Times readers fancied themselves to be ‘thinkers’. The Sun (a handy 18 x 18 inches) was for ‘working men’ (meaning low-brow, beer-swilling brutes) who drooled over the topless girls on page 3 and enjoyed reading small words in enormous print. Sun readers were rude, crude and proudly so.

IT WAS THE SUN WOT WON IT!

Between these two polarities, the rest were identified by their location on the political compass. At the extremes were the Daily Telegraph (rrrrright!) the Guardian (by the Left, march!), and a clutch of minor tabloids fought for the middle-ground of sullen commuters who couldn’t quite stomach party politics first thing in the morning. Your newspaper was a badge of honour. Bank managers wore the Telegraph folded precisely under one arm, students unfurled the Guardian like a flag at every opportunity, and you knew exactly where you stood with a Sun-reader, which was usually in a queue for egg, beans, bacon and chips in a greasy spoon cafe.

Although I’d had a pretty sharp education jammed into me by a mob of Jesuit monks, my relationship with newspapers was fickle and self-centred. Because I won a national schools debating competition at the age of 16, I bought the paper in which my picture appeared – the Daily Express. When I sang in a punk band in 1977, I bought the New Musical Express because they gave us a good review. Working for a demolition gang, drilling buildings into heaps of rubble, I read the Sun (in the cafe, because it was there). Unemployed, I bought the local rag  -South London Press- and read the job adverts. Beyond these rather practical purchases, I had no loyalty or enthusiasm for any particular paper.

I did, however, notice a major change to the weekend editions. As the years slipped by, the Sunday papers had gradually inflated into gigantic, bulging lumps. A morning trip to the newsagent carrying  Saturday’s hangover had become a weight-lifting marathon. It was no joke heaving up a great glossy sheaf called the Observer, Sunday Times or whatever, and humping it home along with twenty fags and the medicinal breakfast lager. I didn’t realise – although I do now – that this was the beginning of the death of daily newspapers. Those bloated Sunday editions were invented to prop up the advertisers who knew, long before the public, that too many people were tired of stale propaganda, even if they didn’t say so out loud. Also -whisper it if you dare – the public’s ability to read anything more challenging than a cartoon caption was dropping fast, courtesy of ‘educational progress’.   The telly and radio were pushing ‘breaking news’ at us 24/7, to the point where anyone could be forgiven for asking – who really needs a newspaper?

A startling series of events in the twenty-first century changed my own relationship with newspapers forever. First, I found myself writing occasional columns in the Saturday Times (a fluke development for which I can take little credit). Immediately, I became an avid student of journalism. But just as I morphed from reader to writer, the horrific events of 9/11 were screaming from every front page, and in short order the UK and USA geared up to attack Iraq. I attended the historic 2003 anti-war march in Hyde park, and wrote a far-from radical piece for the Times, observing that a colossal amount of very reasonable people wanted the UK to play no part in this potential war-crime. It was the first piece I ever submitted that was not printed, and my name never again graced the pages of Britain’s oldest and most respected newspaper. When you’re out, you’re out, I learned. Then I watched in amazement as within a week, every single newspaper without exception caved in to that monstrous WMD hoax and invited its readers to get with the programme and support the unprovoked war. The rest is, unfortunately, history. The Satanic alliance of mass-media and military had triumphed – but the propaganda cat was out of the diplomatic bag, and millions of disillusioned adults would never trust any newspaper again.

THE END OF THE NEWS IS NIGH 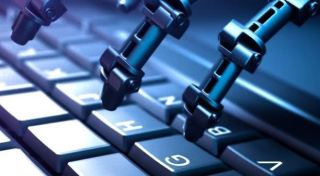 And all the while, the soon-to-be catastrophic growth of the fledgling internet was casting a lengthening shadow over mainstream media. When the print newspapers took the first heavy hits, no one was cheering louder than me – me and a thousand other ex-journalists who had flown close enough to the Sun to get burned. People talk to each other, you see. Far from being unique, it turned out my own instant exclusion was merely the tip of an iceberg of freeze-dried commentary you never got to read.

Karma was coming, however, in the form of a mouse. Like a ninja with a zombie-knife, the internet pounced from the shadows and disembowelled the Press with a single click. Only old people buy newspapers now, and a dwindling number at that. The decline that had turned Sunday papers into coffee-table books became an accelerating plunge into extinction. The advertisers which kept papers afloat have, like everything else, gone online.
None of this, of course, needed to happen, if  journalism had not become a chums club where a good living could be had by simply regurgitating whatever your boss had said over lunch. Or if the public hadn’t been accidentally dumbed down into near-illiterates. But in truth, the papers never really were up to much – we just didn’t realise how bad they were before the net took the lid off the can of collective worms called ‘news’. The nationwide echoes of their collective rumble – believe us, we have sources, we are journalists, we have integrity – only resonated while there were no alternatives to their shrill, mercenary voices.
The impenetrable forest of the internet has quickly become the natural habitat for writers, activists and commentators whose desire  to speak simple truth –or to challenge the official narrative – is unacceptable to the dinosaurs of the Jurassic media jungle.
The power of the web cannot be opposed. The papers have all but given up the fight and fled to the net, with unintentionally hilarious consequences. For example, various titles have been forced to ditch their public ‘comment’ sections because it turned out more readers were influenced by the  comments than by the articles.  Meanwhile, loyal, lifetime Guardian readers plow on oblivious into their labyrinth of PC derangement, apparently blind to the mass migration of writers from the Telegraph, Times and Spectator to their supposedly liberal newspaper, where polyamorous transgender refugees shine like beacons of rainbow hope in the dark night of the newly fascist Britain  (see page 11 for details). Those guys’n gals will write anything at all for a fast buck, and the sad truth is, they always did.

OUR STRENGTH IS DIVERSITY (unless it’s between your ears)

I won’t miss the newspapers when even their online comic-versions have disappeared – as they surely will, because you can’t wrap chips in a website. British newspapers deserve the extinction their arrogance invited, and will, ironically, be buried under a weight of diversity even the liberals cannot bear – diversity of thought.
The good news is, we can all do our bit to hasten that happy day. Bring joy to your older friends and family members – and save them money – by explaining how they can get their favourite newspaper for free online. Every little helps, as they say, and if the net-news leaves them short of a good chuckle, they can always log on to the official begging pages on the Times or the Guardian website. I never fail to laugh out loud, reading the tearful, desperate pleadings for us to tip them a few quid, in the name of “integrity, and honesty”,  to preserve their “courageous independent journalism”.
They deserve only oblivion and their demise cannot come to soon or be too painful. Let’s write off this entire generation of so-called journalists. Throw the whole rotten lot of them on the dole and let’s see what they produce without the incentive of easy money.  And when these coffee-crazed ‘opinion-formers’ have to compete in a free marketplace of ideas, let’s see who gives a cappuccino for their insight. It’s a lot harder to attract an audience -or a job- when mummy and daddy can’t just usher you into an uptown newsroom for an agreeable chat with uncle Rupert or a family friend. The game’s up for nepotism and the old school tie. The future looks digital, difficult and dark. Truth, everyone insists, is harder to find than ever before, but life is too short to look for it in a newspaper. Sic Transit Gloria Mundi. For a century they fed us the best propaganda that money could buy, but it turned out all we really wanted was the racing results and the horoscope.