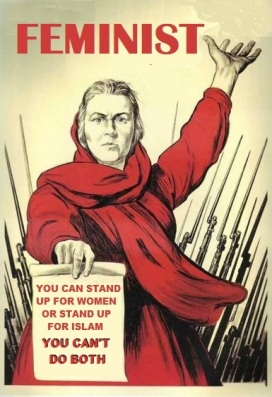 If you seriously believe that females in Britain and the USA are suffering oppression, then feminism
must be the place for you. On the other hand, Saudi Arabia is most definitely not. Not for you, your sisters or your daughters. Ditto Pakistan, Iran, Afghanistan, Yemen… I could go on but the point is made. Modern feminism
does not travel well – particularly in the Middle East.
No doubt it’s great fun stomping down the Mall in your Doc Martens to, emm…”overthrow the patriarchy”, and there are certainly worse things to spend your benefits on than a pussy hat and an Oyster card. But unless the idea is to become a major laughing stock, the new feminist legionnaires had better hurry up and detach themselves from the Clinton / Corbyn army of hobbling, whingeing victims . Get out, brave feminists, run while you still can! Otherwise, there is a very real danger of your being penetrated – metaphorically of course – by the bony finger of mysogyny.

THE SEDUCTIVE SWAMP OF SOCIALISM

It’s easy to see how feminists are tempted into the murky swamp that lies beneath the rainbow-striped marquee of modern Socialism. After all, if you’re too dumb or too young to recognise that the post – Blair Labour Party is closer to Mussolini than to Marx, joining the far-Left coalition might seem like a good way of swelling the numbers for your next anti-Trump rally. (Because modern UK “feminists” have to march against some guy in another continent rather than protest their local gang-rapists, right, ladies?).  But look out, because there are new creatures in the Socialist swamp – the type who have no time for crimson-cropped, tattooed porkers shouting and screaming about the unendurable horror of ‘mansplaining’ etc. Worse still, these new people have a uniquely straightforward view of how to treat the female of the human species. Put simply, these guys like to keep their women on leads, in a blackbag, somewhere around the level of farm animals. Yes, it’s everybody’s new best friends (on the Left) – a big hand, please, let’s hear it for Britain’s very own Islamic fundamentalists!
It has been side-splittingly funny watching female activists trying to ride both the feminist and the Islamist horse in the same race (no pun intended). The standard dialgue stutters along thus:

Say it loud, say it clear,  Refugees are welcome here! Emm…as long as they don’t actually practice their own (vitally important!) culture, and, emm..put a bag over my head, give me a good hard slap and tell me to STFU…emm…I mean, uh… 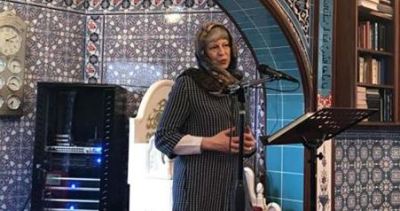 ” I’m wearing this here hijab, in emm…solidarity with our Muslim sisters!…who emm…wear it to avoid getting raped, which would ah…apparently be their own fault..em…according to the men who make them wear the, um, hijab.”

In the spirit of goodwill that is desperately needed when addressing the witless posturing that characterises 21st century feminism, I will humbly suggest that sincere activists need to get down off that  wild Arabian stallion and get legged up onto a cultured Western thoroughbred pronto tonto, before this rape culture they keep complaining about materialises in the house next door. 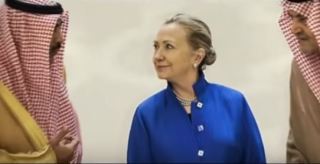 If you seriously think you are already living in a predator’s patriarchy, boy have you got a surprise coming when your new neighbours kick in with Sharia law. Oppression? You don’t know the meaning of the word. But you soon will, mesdames, you soon will…