I’m not going to waste time on the polite stuff – the appointment of Sajid Javid to Home Secretary  is a two-fingered salute to the British Public, in particular to anyone still clinging to the fiction that Brexit will take place this side of a revolution.
Sajid Javid is a central banker in MP’s clothing – a double agent –
one of that new, creepy band of fake politicians which includes France’s banksterboy Macron and Canada’s UN puppet Trudeau. The difference being they are already Prime Ministers and Sajid will have to put up with a short wait before the Tories put him at the top of their slippery pole.

If you didn’t see this coming you must have been living under a rock – the Rock of Gibraltar perhaps, because only an expat could have missed Britain’s inexorable slide into the jaws -oops I mean welcoming arms- of the globalist banksterboys. For those us stuck living in the United Kingdom of North Africa & Asia, the truth is right here in our not-smiley faces.

Can we drop this crap with the “bus driver’s sons” already? We’ve had a bellyful of this tripe from Sadiq Khan – the Muslim frontman -sorry I meant legal genius- who has transformed London into the murder capital of Europe, outstripping the mean streets of NYC for violent death, 90 percent of it happening among the “ethnic minority” communities he has slaved so willingly to expand beyond reason.  Now here comes the latest “bus driver’s son” Sajid Javid, and you can bet he’ll be pushing that crappy sentimental bullshit down your throat all the way to Downing Street. 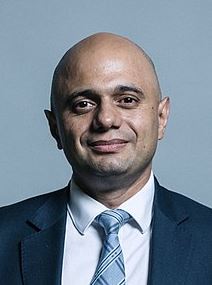 In the year 1991, at the age of 22, having enjoyed 5 years of further education culminating in a degree from Exeter University, Sajid  demonstrated his enormous love and gratitude for Britain by moving immediately to New York City to join the Chase Manhattan Bank. Those guys were so pleased with his performance they made him a vice president at the age of 25. (Because that’s what happens to innocent bus-drivers sons who have absolutely no hidden connections out there in the big bad world – I mean, we all know that, don’t we?). Apparently the Chase Manhattan Bank had him working “mostly in South America” which isn’t remotely strange, is it? Because if you want to run your South American super-honest banking business in the dodgiest countries in the world, you really must recruit some TOTALLY INEXPERIENCED young kid from England WHO HAS NEVER HAD A JOB ANYWHERE BEFORE. Yes. Right.

2. By 1997 running South America for the Chase Manhattan Bank wasn’t challenging enough for the 26 year-old Sajid, so he returned to his beloved UK for the 3 years it took to get himself onto the Directors board of the Deutsche Bank. Then, after a whole 4 years at the coal-face of what banksters call “industry”, he emerged as a Managing Director, no less. Not bad for that ol’ bus-driver’s son, now ageing rapidly, a mature, grey-bearded adult of 35. Yes. Right.

3. Understandably worn out by his meteoric ascent to the top of the bankster hit parade, the wise and ancient Sajid (now 40) kissed goodbye to the lousy £3 MILLION A YEAR he was pulling down at Deutsche Bank, and chose instead to pursue a career in UK politics. Because of course, any international high-flyer would rather have the £77,000 salary you get as MP for Bromsgrove. Yes. Right.

4.  Sajid Javid will say anything to please whoever’s listening, whether it’s hatchet-faced Bankers on Wall Street or bearded Imams in Bromsgrove. Samples – “If I had to leave Britain to live in the Middle East, I would choose Israel” he said, in 2012. (He was at a Conservative Friends of Israel do at that moment).
According to Wikipedia (widely known for printing exactly what MP’s want to be said about them) Sajid claims that ” his family heritage is Muslim, but he does not practice any religion.” That’s kind of neat, don’t you think? As it offers both the following options – “well, I guess we are Muslims really”  AND / OR “ we’re not really Muslims…” Just what you need for all-round appeal.

So far so good (as in “good heavens!” or “good grief!”) for Sajid. But if you think this man should be in charge of British immigration policy in 2018, here are three important things to remember about him. First, although the son of a Pakistani immigrant, he left the UK as soon as his taxpayer-funded education was complete, and spent the next nineteen years becoming extremely rich while working for foreign banking interests. Second, at a time when British immigration policy is the subject of an almighty struggle between the public’s demand for an end to EU control, how can you appoint a Home Secretary who voted to remain in the EU? Third, and most significant – this man has been quietly and carefully prepared -groomed, if you will- to be Britain’s first Muslim Prime Minister. All of the establishment is lined up behind him in advance of this momentous event. The Guardian and the Times have both touted him as future PM, as did David Cameron while still PM himself. In 2014, Forbes magazine compared Sajid to Barack Obama. 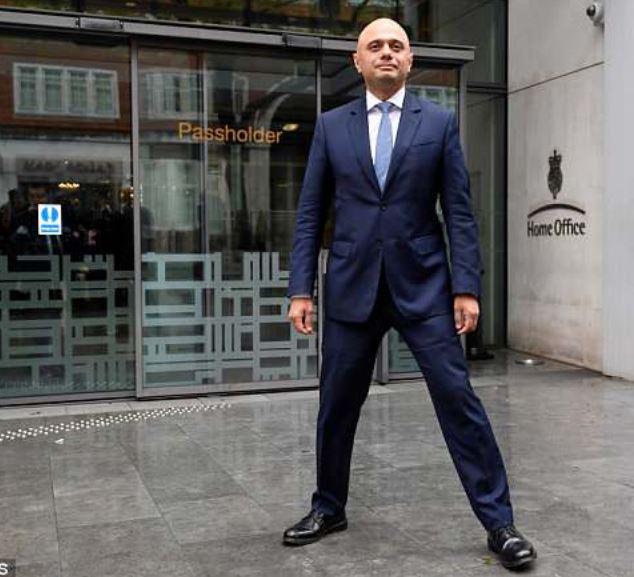 This was always the plan. And now is his moment. With both major parties fighting the phony Brexit war (neither wants any kind of Brexit and neither will deliver one) this man stands poised to be sold as “the man who will unite Divided Britain”. You better believe it. They are going to sell you this man as the BRITISH BARACK OBAMA.

Sajid Javid is nothing but a bought-and-paid-for globalist puppet whose loyalty is to his self-confessed ” Muslim heritage” and the banksterboys who made him rich.